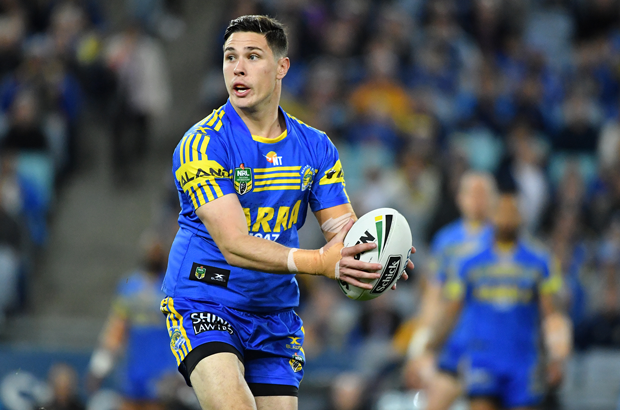 Sunday arvo footy kicks off on the Gold Coast, where the Knights will be looking to stop a four-game slide.

Then, the pressure is on Anthony Milford and the Broncos, as he returns to familiar pastures in Canberra.

But the highlight comes on Easter Monday, when Parramatta will be looking to open their new home ground with a win.

Read on for our match previews and NRL betting tips.

Big things were expected of both these sides in 2019, only for both to come into this game looking for just their second win.

The Titans broke through for their first against the Panthers last time, in an impressive performance that could spark a winning streak.

The Knights meanwhile are looking to snap a 4-game losing streak, and will certainly get their chance against the Gold Coast.

Peachey made 1 line break, 7 tackle breaks and had 2 line break assists in an inspirational performance.

Speaking of inspirational, veteran full-back Michael Gordon also had a belter, running for a team-high 159 metres and scoring a try.

But it's the Titans pack who still have plenty of room for improvement.

This pack takes a hit with Jarrod Wallace rubbed out with a two-game suspension, although Shannon Boyd will make his return to the line-up.

Even though Newcastle have lost four on the bounce, they've been competitive in all of these games.

Last week they were gallant after seeing Manly surge out of the blocks with three early tries.

Ponga looks a greater threat in the number 1 jersey, while new recruit David Klemmer continues to impress at his new club.

It's Newcastle's halves that need to find something. Mitchell Pearce has been solid without setting the world alight, while Mason Lino is still finding his place in the side.

An improvement would see the Knights scrape over the line.

Reasoning: Both sides look evenly matched. Expect this to go down to the wire.

The surprise packets of 2019 host the team that has been the most disappointing, in what's expected to be a corker on Sunday afternoon.

Canberra continue to go from strength to strength, and last week's shut-out of a free-scoring Parramatta outfit bodes well for this clash.

The Broncos meanwhile took another backwards step in Round 5, and quickly need to turn things around or risk setting themselves too great a challenge to make the eight.

Ricky Stuart has got his side playing the complete game.

Last week was their best display yet, keeping the Eels scoreless and scoring 19 of their own.

Charnze-Nicoll Klokstad has been the find of the season, in a series of measured and accomplished performances from fullback.

He's been Canberra's number one metre-eater for the year, and that's an impressive fact considering the big boppers they have at their disposal.

Jack Wighton is also relishing playing in the halves. You know he must be in good form if he's keeping Aidan Sezer out of the side.

It's the same old story for the Broncos, who aren't doing the basics right.

They have the second most missed tackles league-wide with 193, and have made the 6th most errors with 58.

Questions have also been raised whether Anthony Milford and Kody Nikorima can play alongside each other in the halves.

The Broncos are definitely missing a leader out on the park, and need somebody to stand up.

While you can expect Milford to have a good game against his former side, this still mightn't be enough.

Reasoning: Not just their form but the manner in which they've been winning points to another dominant Canberra win here.

This Easter Monday cracker will be the first game held at the brand new Bankwest Stadium out in Parramatta.

The Eels will help this change of scenery will give them a boost and help them bounce back after a sound defeat to the Raiders.

Wests meanwhile will be brimming with confidence after a gutsy win up in Brisbane, and will look to spoil Parra's new house party.

The Raiders are a serious team, and why NRL punters shouldn't be too concerned about last week's performance from Parra.

However, a worrying sign was how ineffective the Eels look without new recruit Blake Ferguson.

Ferguson suffered a gruesome broken nose and was forced from the field just after half-time.

While he has been named to start here, the Tigers know that stopping the strong winger is the key to getting the upper hand.

But with plenty of their forwards in great form, and a raucous home crowd behind them, the Eels still have plenty of go-forward in them.

Why go-forward and field position will be so important here is that it's the style of game that the Tigers force on opponents.

Under Michael Maguire, they have been doing all the one percenters, marching down field and often kicking early in the tackle count to pin the opposition in the corner.

In other words, they have been winning off energy, rather than flowing attacking play.

Josh Reynolds typifies this high-energy style, and he played another blinder last week against the Broncos.

If they can cope with a pumped-up Parra, then the Tigers have the grit to get over the line.

Reasoning: They have shown enough this year to suggest that they'll have the Tigers covered, especially with the boost a new stadium will give them.

2018 media tipster champ: Eels
Check out all the best betting promotions on offer for this weekend's games.