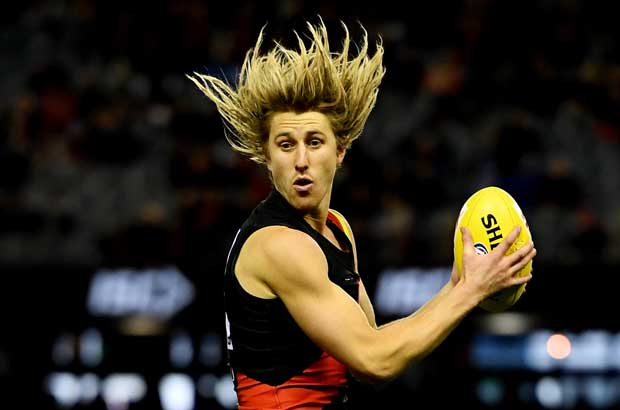 Sunday footy kicks off with the Blues and Kangaroos looking to leave the other stranded at the bottom of the ladder.

Then it's the highlight game of the round, when the in-form Essendon and Geelong square off at the MCG.

Round 7 is rounded out with another cracker, when the Dockers look to keep the good times rolling in Adelaide.

Two of the teams stuck down the bottom of the ladder on just one win do battle on Sunday, when Carlton hosts the Kangas.

The Blues were so close to making it two straight last week, when they fell agonizingly close against the Hawks.

Brendon Bolton faces a task in getting his players to refocus for this clash, which could have big implications for race to avoid the wooden spoon.

North meanwhile will be looking to build off the momentum of a strong fourth quarter in Round 6.

Usually for Carlton it's all about Patrick Cripps.

But last week, Cripps had his quietest game of the year, and it was his teammates like Sam Petrevski-Seton and Ed Curnow who really stood up.

The Blues sped out to a six goal lead, before getting caught, and eventually going on to lose by less than a straight kick.

If Carlton's younger brigade can back up that effort, Cripps is due to have a big performance, and it'll all fall into place for the Blues.

The Kangas lost by 16 points to the Power last week, down in Adelaide.

However, this is a flattering scoreline in a game where the home side totally dominated.

Only when Port fell asleep in the final term did North start playing, where they kicked five goals straight to end the match.

But in a worrying sign, cult full-forward Ben Brown is horribly out of form.

He was kept goalless for the first time in 2019.

It appears that his confidence has been shattered after all the heat he's been copping in the media.

Reasoning: The Blues have shown far more in the past fortnight.

If the form stacks up, they'll prevail.

The highlight game of the round sees top-of-the-table Geelong host the fired-up Bombers.

AFL punters need to be wary of the fact that though this is a Geelong home game, it will be played at the MCG, which gives Essendon a much greater chance.

The Dons will be feeling hard done by after a number of contentious calls late in last week's narrow ANZAC day defeat.

If they can use that as inspiration, look for them to bounce back at the 'G.

The Cats have clearly been the best side of 2019, and it's no surprise that they start as strong favourites in the AFL odds.

They put on a clinic against the defending champions in Round 6, with a dominant display in front of their home fans.

He's relishing playing down in the forward line, especially as Tim Kelly and Patrick Dangerfield continue to control things from the middle of the park.

Gary Rohan also booted another four goals down forward, as he continues to rejuvenate his career after moving from Sydney.

Essendon fell just one goal short against the Pies.

If pacey small-forward Orazio Fantasia hadn't been withdrawn with an illness, his quality may have gotten the Dons over the line.

He's likely to return here, which would unite the three-pronged attack of Fantasia, Tipungwuti and Daniher for the first time in 2019.

These three can cause plenty of carnage in the forward line. If they're all on their game they'll give Geelong a scare.

And if Dylan Shiel can just add an end product to his game, he's got the potential to become a star at Essendon.

The signs are looking bright.

Reasoning: The Dons are improving week on week, and will fancy their chances at the 'G.

The round concludes in Adelaide, where both teams will be playing for their third straight win.

Ladder position is on the line for the home side, who would sneak into the eight with a win.

While the 2nd-placed Dockers will have the top rung on the ladder in their sights, making for what's sure to be a fiercely competitive fixture.

Adelaide look to have finally put it all together, in their quest to return to their white-hot form of 2017.

While they're not there yet, dominant back-to-back wins suggest that it's not far away.

Big Tex Walker has got himself back on the scoresheet of late, and last week booted four impressive goals.

Eddie Betts also backed up his six-goal haul with another two majors.

Look for these two to combine once again in front of a vocal home crowd.

Freo have had a solid defence and a star midfield for a few seasons now, but have just missed the quality in the goals department.

Not this year though, where goals have been coming from plenty of channels.

It was Brandon Matera who really got in on the act in Fremantle's 19-point win last week.

He kicked a bag of five to go alongside David Mundy's two goals in his 300th game.

And with Nat Fyfe continuing to pull all the strings in the middle of the park, Freo are a serious side.

Reasoning: With so much quality all over the park, the Crows will win handsomely if they turn up.