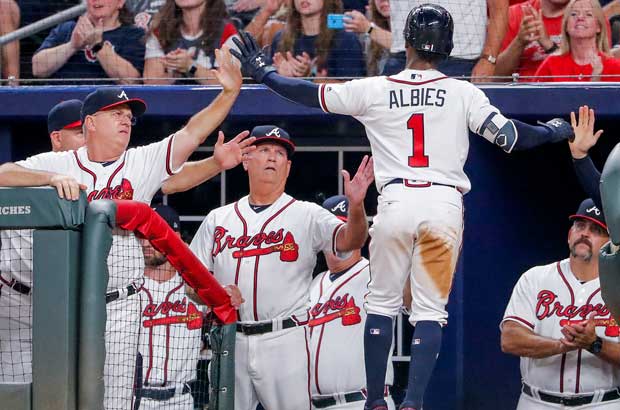 An enthralling All Star Break in D.C.has lit a spark within players and teams alike to push towards their playoff aspirations in the second half of the regular season.

The four match divisional series taking place from 26th-29th July between the Los Angeles Dodgers (56-46) and Atlanta Braves (54-44) depicts two teams atop their respective divisions, aiming to distance themself from challengers below.

Unexpected by most, the 2018 Atlanta Braves are the perfect example of a rebuild reaping rewards when executed correctly. It has been a rough stretch for Braves fans, as the team has averaged nearly 93 losses per year over the past three seasons.

Many fan-favourite players were shipped off for raw prospects dampening the spirits of the Braves faithful, as team management focused on restocking their farm system and building for the future. However, from the darkness a team with strong character and excitement has emerged, led by mix of youth and veterans alike.

Number two rookie prospect Ronald Acuña Jr and Ozzie Albie are currently amongst the two hottest youth talent in the MLB, with both players carrying brilliant stat lines. Furthermore, veteran Nick Markakis is having a career-year whilst Freddie Freeman is having the MVP caliber season that most fans knew he was capable of.

These factors combined have brought this team to the forefront of not only the National League East division, but baseball as a whole and much earlier than expected.

After beginning the year as equal MLB World Series bookmaker favourites, the Los Angeles Dodgers crashed to a horrific start to the season, being 16–26 after 42 games.

While this can be attributed to Clayton Kershaw, Rich Hill, Kenta Maeda, Hyun-jin Ryu and Walker Buehler all spending extended time on the disabled list, the Dodgers’ offense was also in a major slump.

Since that point, the team has mustered together some real fire power, led by little-known Max Muncy who has crushed 24 home runs since his call up from the minors. The offense, now boosted by the recently acquired Manny Machado, is homering at a high rate (seven players have more than 10 home runs).

If the Dodgers really want to stamp their authority as leading contenders, then this match up with Atlanta will be crucial for their run home.

Rich Hill is the first of three left hand pitchers the Braves will have to face in this extended series. The ‘southpaw’ is capable of a devastating performance when he is on his game, however his inconsistency should be enough to provide hope for Atlanta to start the series off with a hot start.

For Atlanta, Anibal Sanchez takes the mound and while his full-season numbers remain impressive, the veteran right-hander showed some less than encouraging signs against the Nationals in the first game after the All-Star break and it will be interesting to see how he responds to this dangerous Dodgers lineup.

Rich Hill’s last performance showed some real nice touches to only give up the sole run in his teams 6-4 victory over Milwaukee. Recovering well from his time on the DL, expect Hill to put in another impressive performance to lead the Dodgers to a win in the series opener.

MLB Pick: Dodgers to win on the moneyline

Still arguably the Dodgers’ ‘Ace’, Clayton Kershaw has had a tumultuous year, battling injury for large spans of the season. Since his return, his form has been a mixed bag. His starts have often been brilliant, with his curveball still working wonders, but as the game drifts so does his arm speed and accuracy.

This was seen in his latest outing against Milwaukee, where he was responsible for blowing his team’s 2-1 lead in the sixth inning, giving up 3 runs.

There is no doubt that he is still on the mend and cretequing him on a 2.64 ERA is hardly fair, but until we can assess a full all-rounded game (7+ innings), value opportunities will be present in the betting market, against him. Given his reputation bookmakers often price him under the odds.

Braves pitcher Mike Foltynewicz is having a stellar year which not many saw coming, posting a 2.85 era. However, he has been on the slip in his past seven games, posting a 2-3 record and 3.99 ERA in that stretch. Braves fans will be hoping that the All-star break may have given him a chance to rest his arm and return to his best.

Although this intriguing battle pits these two great pitchers against each other, their dubioust form of late  suggests that there may be extreme value in the over/unders total run line markets. Expect the bookmakers to set the total run line low in this one at around 7.

A rejuvenated Dodgers attack and Atlanta’s consistency should ensure this will be a close encounter, but with enough runs to cover the line.

MLB Pick: Over 7 runs to be scored in the game

Alex Wood has been ‘lights-out’ in his past seven starts, holding a 5-0 record combined with a 2.95 ERA. His ability to stay healthy amongst the Dodgers’ pitching staff has been a real bright light for the organisation, who have been extracting plenty of   value out of him all season.

Max Fried has been playing in the Minors as he recovers from an injured thumb. He is predicted to return in this match-up, but be wary as the Braves could throw a late curve-ball and make a change to the lineup. Either way LA should win this match convincingly.

MLB Pick: Dodgers to win on the moneyline

Ross Stripling has had a bright year filling in the rotation during the Dodgers’ spell of injuries. Stripling has already compiled 108 strikeouts at the midpoint of this season, which eclipses his full year stats from the past two years.

He forced his way into the Dodgers rotation after season high performances of 9+ strikeout games during the month of May, leading him to a 8-2 record for the year .

Sean Newcomb has managed to work out some of the control issues which he experienced in his debut year to become one of the best pitchers in the National League this season. With experience, he will keep growing into a great pitcher for Atlanta in the years to come.

At home and with the crowd behind him, expect a great pitching performance to lead his team to a victory

MLB Pick: Atlanta to win on the Moneyline