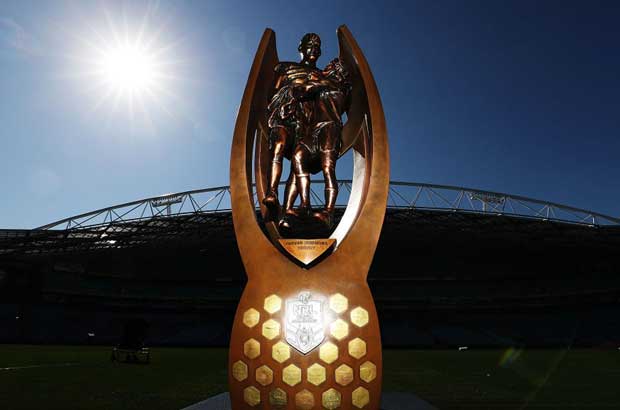 Your punting guide to the run home

As the representative period has come to an end and the biggest stars of the game are focused on club footy, the race for the NRL Premiership is starting to heat up.

With seven rounds of the NRL regular season to play, we've taken a look at the latest NRL odds and have found plenty of value for punters.

Check out the contenders, the pretenders and the best bets in the premiership, top 8 and wooden spoon betting markets.

This is the perfect run home for the Storm, with four of their seven games against top-eight teams.

The advantage of a tough run home for Melbourne is that they are forced into playing their best footy leading into the finals.

With the premiership ladder so congested, the Storm can't afford to take it easy over the coming weeks, which will ensure they are performing at 100% week-in-week-out.

The biggest test for Melbourne on their run home will come in round 19, with a trip across the Tasman to face the unpredictable Warriors.

Regardless of the result in New Zealand, the Storm will press for minor premiership honours.

The key to the Storms' success will rest heavily on the shoulders of Cameron Smith, Cameron Munster and Billy Slater. With the big three fit, expect the Storm to finish on top of the ladder and to be there on Grand Final Day.

The Chooks have a soft run to the finals, with four of their seven games against teams outside the top-eight.

The Roosters' biggest clash will be against the Bunnies in round 22. By then you'd expect Souths' winning streak to have come to an end, and they'll be vulnerable against a Roosters outfit with a head full head of steam.

With plenty of star-power in the Roosters squad, it wouldn't surprise to see them go on a winning streak to the finals.

Victory in their last seven games will see them finish on 38 premiership points, which could be enough to contend for the minor premiership.

The form team of the competition are looking for their 10th consecutive win in round 19. However, they face a much improved Wests Tigers who pose as a threat to break this winning run.

The last seven games are arguably the Bunnies hardest of the year. The run to the finals is not the time to start losing momentum and bunnies fans will be on edge when it comes time to face off against the Storm, Roosters and Broncos.

The Panthers have been heavily affected by injuries this season, but have shown great depth to compete week-in and week-out.

In a boost for their top-four aspirations, three big-name players will return from injury in coming weeks. Josh Mansour (Round 20), Dallin Watene-Zelezniak (Round 21) and Reagan Campbell-Gillard (Round 21).

Off the back of confidence-building Origin series, the halves combination of Nathan Cleary and James Maloney will take Penrith deep into a finals campaign.

With one of the best runs home of the teams inside the top-eight, the Sharks will need to overcome the Melbourne Storm in round 22 if they are to secure a top-four position. Their poor for and against looks likely to be a road back to top-four success however.

If they manage to knock off the Storm and things fall their way such as a Roosters slip up, the Sharks could sneak top spot and are worth a small bet at the $15 to win the minor premiership.

Boasting a forward pack full of representative experience and a spine that is now settled into their attacking structure, the Sharks should go deep into the finals.

The biggest game of the season for the Dragoons comes in round 19. A loss to the Cowboys could well send their talented playing group on a downward spiral.

St George was a class above their competition throughout the first half of the season. However, a combination of origin fatigue and complacency has snuck into their recent performances. Signs of the wheels starting to fall off were noticeable in their round 12 defeat to the hands of the Panthers.

A last minute escape against the bottom of the table Eels in round 16 was then followed up by a loss to Melbourne where the conceded 50 points.

Add to that a poor showing against a new look Tigers side in round 18 and the alarm bells are now ringing at Kogarah.

The Dragons have shown an inability to adapt mid-season in recent years, which allows opposition clubs great insight into their game plan.

Coming off two consecutive losses, the Warriors regained their form in a big way last week with a dominant win over Brisbane at Suncorp Stadium.

That victory could be the spark which ignites the fire within the talented Warriors squad. Their biggest test on the run to the finals comes in round 19, with a clash against Melbourne in Auckland.

In a huge plus for the Warriors, their three games against top-eight teams are all at home. The return of key forwards Leivaha Pulu (round 20), Tohu Harris (round 20) and Bunty Afoa (round 22) is an added boost for coach Steve Kearney.

With a spine of Roger Tuivasa-Sheck, Blake Green, Shaun Johnson and Isaac Luke, New Zealand have the talent to go all the way.

Off the back of their worst performance of the year, the Broncos will need to regroup quickly if they want to be a premiership force.

With four of their last seven games against top-eight sides, Wayne Bennett's men will do well to hold onto eighth position on the ladder.

The next two rounds look set to have a significant bearing on the remainder of Brisbane's season.

This is not how future immortal Johnathan Thurston would have envisaged his final year in the NRL, as he fights to the very end in an attempt to avoid a last-place finish on the ladder.

The Cowboys meet four top-eight teams on the run home but have a solid enough team to pick up at least two wins and avoid the spoon.

The Eels have the easiest run home of the bottom three teams, facing both of their wooden spoon rivals.

Parramatta must defeat the Bulldogs (round 19) and Cowboys (round 24) if they wish to avoid last place.

Their last two efforts have been solid, losing by only two points to both St George and Newcastle, with Jarryd Hayne starting to show glimpses of his old self.

Round 19 shapes as crunch time for Doggies fans who are looking to avoid the dreaded wooden spoon.

With the most difficult run home of the bottom three teams, their clash against the Eels looks their only opportunity to get a win.

Things don't look good for Doggies fans however and with season ending injuries to key players and club favourites heading for the exit door, expect things to get worse before they get better.

NRL Betting Tip: Bulldogs to have the most losses @ $2.75