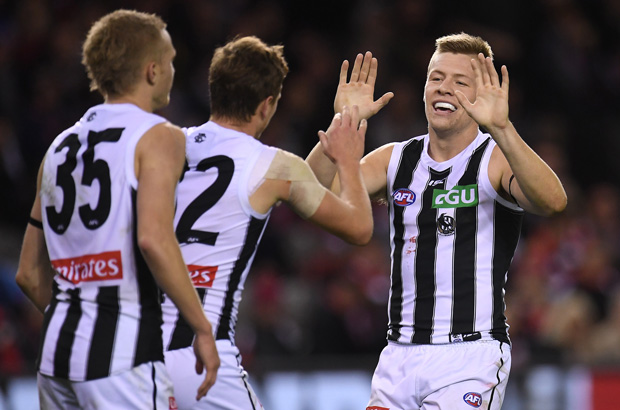 Magpies to swoop on injured Blues

Round 8 begins up in Sydney, where the Bombers are expected to keep the Swans pinned at the bottom of the ladder.

Then the competition travels to Ballarat, where the Bulldogs will be looking to build off last week's strong win when the Lions come to town.

But all eyes will be on the grudge match at the MCG, where Carlton will do their best to keep the score respectable against the old enemy Collingwood.

Before placing your AFL bets, read our match previews and AFL betting tips below.

The round begins at the SCG on Friday night, where the visiting Bombers will fancy their chances.

They come up against a Swans side in very unfamiliar territory at the bottom of the ladder.

Buddy is a chance to return after missing a fortnight with a hamstring strain, and you'd have to think his presence is crucial if Sydney want to lift themselves out of the cellar.

Despite ultimately going down by 22-points to the Lions last week, the Swans showed signs of fight.

The Bloods kicked three straight in the 3rd quarter, bringing the margin as close as 2 points, before being blown away late in the game.

Tom Papley stood up in the forward line with 4 majors, while Will Hayward also impressed with 2 in his first game back from injury.

However, an injury cloud hangs over Papley after he was savaged in a courageous marking attempt in the fourth quarter.

Back at home, and if Buddy returns, the Swans are in with a good shot.

Essendon have run into the two of the best teams in the comp in the last fortnight.

They followed up their narrow ANZAC day loss to Collingwood with a belting at the hands of Geelong.

While that performance doesn't inspire much confidence, the Dons have all the players at their disposal to bounce back.

This is especially true if Orazio Fantasia can overcome the virus that has seen him be a late withdrawal from the previous two games.

Dylan Shiel and Zach Merrett have shown good form of late. They combined for 62 disposals last week against a star-studded midfield, which bodes well for this clash.

Reasoning: Even if Buddy returns, it's hard to see him playing at his peak as he gets back up to speed with the AFL.

And with too much firepower all over the ground, Essendon should win well.

The Western Bulldogs will come in full of confidence after pulling off the upset of Round 7.

Their 47-point victory over Richmond was a massive shock given that they started as heavy outsiders in the AFL odds.

However the headlines were all about Aaron Naughton, the Dogs teenager who booted 5 goals and took a club record 9 contested marks.

While the Lions have some quality youngsters of their own, they'll have to be good to contain Naughton and his teammates.

The Dogs powered back to form last week after a four-game slump that saw them lose to Carlton among others.

All they need to do is maintain the same standard that saw them demolish the 2017 premiers, and they'll breeze to victory here.

They dominated every facet of the game, but in particular the uncontested possessions, which they won 301 to 206.

This huge discrepancy was a result of all the contested ball they won, not just on the ground but in the air.

They'll need to put in again to overcome a good Lions side.

Speaking of Brisbane, they also had a strong win, overcoming the Swans by 22.

This saw them rise back into the top four, alongside the Giants, Pies and Cats, who have all on at least 5 games.

You couldn't have asked for a better start to the season as a Lions fan.

Not only have some of Brisbane's younger players started to mature into genuine weapons, but new recruits Lachie Neale and Lincoln McCarthy have been superb.

If they can take that form to Ballarat, then they have every chance of making it six.

Reasoning: You couldn't tip anything else based on the Dogs' performance last week.

The AFL's fiercest derby will take centre stage on Saturday arvo, when the Blues will do their best to contain the high-flying Magpies.

The Blues start as $6.50 outsiders in the AFL odds, and based on what they dished up last week, it's not hard to see why.

Carlton suffered a 58-point shellacking at the hands of North Melbourne, undoing all their good work in previous weeks.

While they always lift for this fixture, it's hard to see them getting the better of a Collingwood side looking to make it five straight.

An upset win isn't beyond the Blues, and especially in this fixture, where they've pulled it off twice in the past three seasons.

Patrick Cripps would need to be immense, and lay the platform for his teammates to follow.

Once again he was the rare shining light in a beaten side, with 2 goals and 26 possessions against the Roos.

But with Liam Jones set to join Kade Simpson and Sam Docherty on the sidelines after last week's concussion, the Blues are looking very light down back.

Their young defenders will need to be superb.

The most pleasing thing for Pies fans is just how good their forward line is looking.

Jordan De Goey is arguably the best player in the comp right now, while young Jaidyn Stephenson played the best game of his career against the Dons.

Add Ben Reid who recently impressed in his return to the side, and Brody Mihocek who continues to be underrated, and Carlton defenders will have their hands full.

All Collingwood need to do is win the midfield battle and their forward line will do the rest.

Even without Taylor Adams who is set to be sidelined for a month, the Pies have one of the best mids in the comp.

Reasoning: As good as the Pies have been, expect Carlton to lift in this grudge match and keep it competitive.