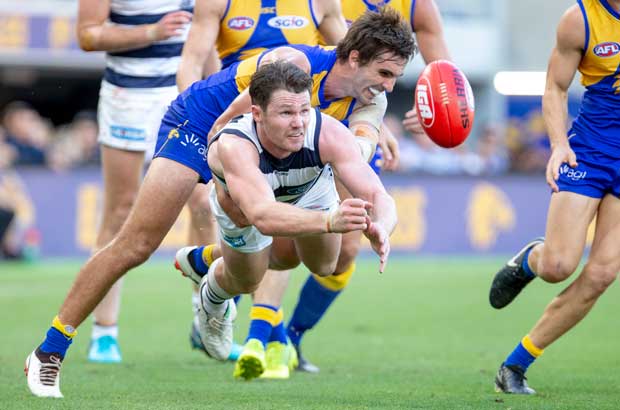 Purring Cats to power past Eagles

Sunday footy kicks-off with Calton's attempt to make it two on the bounce, when they head to Tasmania to face the Hawks.

But it's the Geelong versus West Coast clash that takes centre stage, with the winner likely to be installed into premiership favouritism.

Fancy placing a bet on the AFL? Read our match previews and AFL betting tips below.

Calrton picked themselves off the canvas last week with a dominant 44-point win over the Dogs.

Not only was this their first win of the season, but it was also the first time they kicked 100+ points in over three years.

This will give them bags of confidence to topple a Hawthorn side struggling for form.

A shift in scenery to their Launceston fortress might be the spark they need.

While the Hawks didn't get the win in the Easter Monday clash, they certainly acquitted themselves with a solid performance.

Ricky Henderson was immense with 33 disposals and 2 goals, while big ruckman Ben McEvoy also chipped in with two goals to go alongside his 37 hit-outs.

These two are Hawthorn's unsung heroes, who have lifted to another gear in the last year and a bit.

With Ben Stratton set to make a return from injury, the Hawks have all the experience to get the job done.

All they need to do is back-up after an energy-sapping loss on Monday.

While the Hawks have bags of experience, it's Carlton's youth that is their greatest asset.

Sam Petrevski-Seton, Sam Walsh and Harry McKay will probably share the Brownlow votes between them for last week's win.

And incredibly, these three are all 21 years of age or younger.

But don't think the Blues are without experience.

Matthew Kreuzer recently returned from injury, while Marc Murphy had a good game last week with a goal and 28 touches.

Don't put another upset past them.

Reasoning: The young Blues are always up for the fight, and will be full of confidence after getting their season off the mark.

Two of the favourites to win the premiership in the current AFL odds market will do battle here, when West Coast travel to Geelong.

The Cats ares sitting pretty at the top of the ladder, and will relish the opportunity of righting the wrong of a fortnight ago, and getting the win at the Cattery.

Kardinia Park really is a fortress, and it's a fortress the Eagles will have to breach if they want to get back to winning ways.

After being stunned by Port last week, look for West Coast to come out and respond in this Sunday afternoon blockbuster.

Geelong's talent-laden squad is starting to put it all together, and emerging as a genuine flag contender.

With the younger midfielders of Tim Kelly and Patrick Dangerfield performing their socks off in the middle of the park, this has allowed the more senior duo of Joel Selwood and Gary Ablett to play different roles.

Ablett has been deployed in the forward line of late, and against the Hawks on Monday, it was his class that really came to the fore.

With the added motivation to get back to winning ways at the Cattery, Geelong will be very hard to beat.

The Eagles are a side who have really built their success of the previous few years on their ability to control the ball with precision kicking and strong marking.

But in the wet last week against Port, this wasn't possible.

With dry weather expected for Geelong on Sunday, expect a drastic improvement in the Eagles performance.

However, the likes of Andrew Gaff and Luke Shuey will need to be at the top of their game if they want to contain the Cats' powerhouse midfield.

Reasoning: The Cats look like the real deal, and should prove far too strong at home.