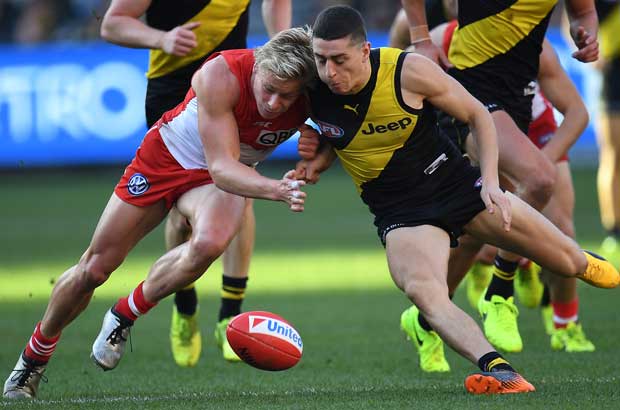 Swans to take flight against Tigers

Saturday's schedule of AFL action resumes in the nation's capital, where GWS will be looking for their 10th straight win.

Then, Melbourne fans will be hoping that the Demons return to their ruthless ways against the Saints.

And then the highlight fixture, when Sydney will be out to prove doubters wrong in a crunch game against Richmond.

Want to know which way we are leaning with our AFL betting tips? Find out below.

Saturday's AFL action gets underway in Canberra, which isn't good news for Fremantle.

GWS have an imposing record at their second ground, and they'll look to extend that with a big win over a Freo side who are generally poor on the road.

However, it's not all doom and gloom for Dockers fans.

A brave 13-point defeat in last week's Derby, without star midfielder Nat Fyfe, will give the visitors some confidence here.

The Giants were immense last week, defeating Geelong at the Cattery for the first time in their AFL existence.

This was after losing co-captain Callan Ward to an ACL injury early in the first quarter.

GWS were down a rotation the whole game, and Toby Greene was still absent from the side, and yet they were able to topple the undefeated Cats on their home turf.

Even if Greene doesn't return from a calf strain here, GWS are looking like a fearsome prospect for any team, let alone the Dockers.

This is especially the case at Manuka Oval, where Leon Cameron's men have established a formidable record.

Fremantle were another side who responded well to adversity in Round 4.

After their captain Nat Fyfe was ruled out with concussion, many expected Freo to lie down against the Eagles.

Bucking expectations, they put up a fight to the last, where they just didn't have enough points to scrape over the line.

That was a derby, where questions would be asked by locals if Freo didn't show fight.

But away from Perth, and after a gruelling effort, it would be a surprise if the Dockers keep it close here.

Reasoning: Recent form, the personnel from both sides, and GWS's record at Manuka Oval all point to a big victory for the home side.

To the immense relief of their fans, Melbourne finally broke through for their first win of the campaign in Round 4.

That was an impressive away victory at the SCG, where a near flawless second half had the Demons looking like the side that made it all the way to the prelims last year.

As impressive as St Kilda have been in the opening month of the competition, they won't get within cooee of the Dees if they carry over their second-half display from Round 4.

Simon Goodwin has the personnel at his disposal that- even with a handful of key players sidelined- the Demons should have won all of their games so far in 2019.

But like a horse that misses the start by three lengths, the Dees were very slow out of the blocks. They didn't seem to want to put the effort in, and just played like they expected to win.

That all changed last week, where, in the second half in particular, Melbourne started not just attacking but defending to the standard we know they are capable of.

If the Dees maintain that intensity and effort for a full four quarters here, they'll be winning by 50+.

However, there's no way punters will be discounting St Kilda, after they've won 3 of their opening 4 games.

The most impressive of these wins came last week, when the Saints came back from a 26-point deficit in the 3rd quarter to eventually prevail by 5 points.

Interestingly, despite St Kilda sitting 5th on the ladder, they've scored the sixth fewest points in 2019.

That says they've been winning by defence. That's how they're going to have to do it again.

Reasoning: With so much more room for improvement, Melbourne should cover this line.

The Swans will be looking to "do a Richmond" here.

After naysayers were predicting the end of an era for the Tigers, they came out as heavy underdogs and knocked over Port Adelaide in Round 4.

This time, the idea that the Sydney Swans era is about to end is being floated, after some underwhelming Buddy Franklin performances and just 1 win from their opening 4.

John Longmire will be hoping to use this criticism to galvanise his young players to cause an upset of their own.

Richmond's success over the past two seasons has been built off the contributions of all their players, and not just their big names.

Even so, with Rance, Reiwoldt, Cotchin and Dusty all out, few expected the Tigers to win.

But win they did, thanks to a return to the high-pressure, bees-to-a-honey-pot style of play that saw them overwhelm the Power on their home turf.

They dominated the tackle count, and were helped by new recruit Tom Lynch, who booted six goals.

With Dustin Martin set to return from suspension for this clash, it's no surprise that the Tigers are starting as heavy favourites in the AFL odds.

Not just Buddy, but fellow star players Luke Parker and Josh Kennedy have had mediocre starts to their 2019 campaigns.

But with bags of quality, these three are due for a big game. If they all perform somewhere near their best here, then Sydney will get the job done.

That's because most of their younger players have started the season well.

Isaac Heeney and Oliver Florent were both terrific for the most part against the Dees. These young mids are Sydney's next generation, and they are ready to make a statement here.

Reasoning: The Swans have shown time and again that they respond when their backs are against the wall.

They might not win, but they'll certainly keep it competitive.