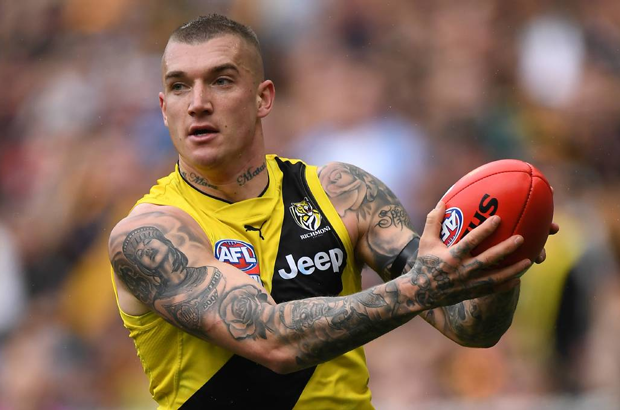 Tigers to feast on demoralized Demons

The ANZAC round of the AFL gets underway on Wednesday night, when the struggling Dees will hope to keep it competitive against Richmond.

Then it's the traditional ANZAC blockbuster, when fierce enemies Essendon and Collingwood do battle in front of a huge crowd.

And then the Kangas will hope to hop off the bottom of the ladder. They head to Adelaide on Friday night.

Before the footy feast gets underway, read our AFL betting tips for the early games in Round 6.

Two of Melbourne's oldest rivals face-off on Wednesday night, when the Tigers host the Demons at the MCG.

The Dees seemed to have put their horror start to the season behind them in Round 4, before they came out last week and got towelled-up by the Saints.

With just percentage keeping them off the bottom of the ladder, they need to start winning soon, or risk sitting out in September.

But with an in-form Richmond side in their path, it won't be easy.

Just when it was looking like the yellow and black army were set for a stint down the bottom of the ladder, they've come out and won two straight games.

Their famed tackle pressure has been getting the job done for them in a period where their star players have been out with injury and suspension.

Jack Reiwoldt only needs to pass a fitness test to be ready for this clash and alongside an in-form Tom Lynch, the Tigers will have plenty of firepower up front.

And with an outstanding record when playing in Melbourne, it's no surprise that Richmond are listed as heavy favourites in the AFL odds.

The way Melbourne have started their 2019 campaign has had many experts scratching their heads.

The Dees have one of the most talented squads in the AFL, but are playing like one of the worst.

They're ranked equal first for most clangers in 2019, an AFL stat that they interestingly share with Richmond.

However, while the Tigers have never been about precise ball use, the Dees have.

They're not only executing poorly, but don't seem to be playing with the same energy or toughness that saw them make it to the prelims last year.

With plenty of injury concerns, only a massive form reversal would see them prevail here.

Reasoning: While the Demons couldn't be as bad as they were last week, you could only tip a Tigers win here.

The traditional ANZAC day clash will see two teams in top form take to the MCG in front of what's expected to be a 90,000+ crowd.

You know that the contests will be fierce, as the gun midfields from both teams butt heads in the middle of the park.

Essendon will love nothing more than to claim Collingwood as their fourth-straight scalp after a shocker start to the season.

The Pies meanwhile are looking the goods and can rise to the top of the table with a strong win here.

If you forget the opening two rounds, then the Dons are playing like the best team in the competition.

They've got back to their dynamic, free-flowing attacking play, with small forwards Anthony McDonald-Tipungwuti and Orazio Fantasia starting to dominate.

And with star full-forward Joe Daniher lining up for his first game of 2019 last week, the Bombers have plenty of ammunition up front.

He'll only improve with that game under his belt.

Look for a big performance against an understrength Collingwood defence.

Speaking of the Pies, they have more than enough attacking weapons to trouble the Dons.

They racked up 123 points away to Brisbane last week, which should have Essendon's defenders worried.

But it's the midfield where the Maggies will hope to win it.

With players like Adam Treloar, Steele Sidebottom, Taylor Adams and Scott Pendlebury in the middle of the park, the Pies have the clear ascendancy on paper.

Reasoning: Both sides have been scoring for fun of late.

With so many weapons up front, expect this game to turn into a shootout.

Friday night footy takes us to the Adelaide Oval, where both teams will be desperate for a win, albeit for different reasons.

Port will come in full of confidence, after they pulled off a huge upset in Round 5, toppling the Eagles out west.

However, Port Adelaide are renowned for their inconsistency, and need to make a statement with a big win in a game where they'll start as heavy favourites in the AFL odds.

The Kangas meanwhile are languishing at the bottom of the ladder. A win is essential.

Port have already unearthed some young guns in 2019 who look like stars in the making.

But in their big win over the Eagles, it was the experienced hard-heads in the middle of the park who got the job done.

Tom Rockliff was immense, while Ollie Wines was best on ground with 35 disposals and a goal.

At 24 years of age, Wines is ready to explode, and become one of the competition's elite midfielders.

He'll need to have another good game to help overturn a recent poor run at the Adelaide Oval.

The Kangas were okay for about a quarter last week, before they were blown off the park by Essendon.

While they don't quite have the personnel at their disposal as some of Melbourne's other clubs, North were still expected to be challenging for the eight in 2019.

Especially after they recruited the likes of Jared Polec and Japer Pittard in the off-season.

Both are ex-Power players, and they'll be looking to come out and make a statement against the club that let them go.

Even so, the Roos have been very poor, and you couldn't tip them on what we've seen so far.

Reasoning: You just can't trust the Power at the Adelaide Oval.